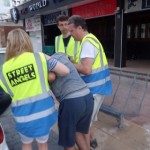 Over the last couple of weekends we have seen a lot more people out in Magaluf.

As a result we have given about 100 directions and helped 61 people back to a place of safety!

It’s been lovely getting some feedback from people we have helped as well, as usually we don’t hear anything further.

Just wanted to send a message on here. I was out with some friends last night and me and one other guy were in a bad way until you guys turned up. You helped us out loads and drove us back to our hotel. I don’t know what we would have done without you guys. We probably would have still been there now. Serious life savers thank you. I’ll donate when I’m home xx

We also had the opportunity to show a couple of guys around from The Foreign and Commonwealth Office which was good.
They are behind the #holidaywin #holidayfail social media campaign trying to get people thinking of safety before they come and during their holiday.

In the early hours of this morning, I got a part-panicked phone call from a friend who was out in magaluf with my boyfriend and 6 other of their friends. It was understood that my boyfriend in perticular was in a bad way and had possibly had his drink spiked. I wanted to say thank you to your helpers out in Spain who looked after them all last night/this morning and helped them get back to the hotel safety. Without you I dread to think what sort of other trouble they would’ve gotten into.